Born in 1931 in Castelsarrasin, France, but raised and educated in Barcelona, his childhood was marked by the Spanish Civil War. Those were years of hardship and trials for him and his working-class family. From a very early age, he took refuge in drawing.

At age 14 he attended the Barcelona School of Arts and Crafts, where he showed remarkable skill as a restorer and gilder. In 1952 he entered the Royal Academy of Fine Arts of Sant Jordi. During his second year at the academy, he won first prize in the Figure Painting category at the university art show in Madrid. He travelled to the capital, acquainted himself with the Prado and frequented the Royal Academy of Fine Arts of San Fernando.

In the summer of 1954 he discovered Catalonia’s Empordà region and the village of Calella de Palafrugell on the Costa Brava, a world of fishermen like Pepet Gilet where singing Habaneras is a cherished tradition. From that moment on, the Empordà became a part of his life and work. 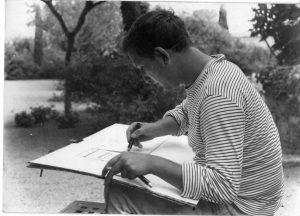 In 1957 he won a scholarship to complete his study in Paris. He attended classes at the École des Beaux-Arts and frequented the Académie de la Grande Chaumière.

During his years in the French capital, he restored several rooms in the Elysée Palace, and his efforts were personally acknowledged by President René Coty. He later restored the office of the Minister of the Navy in the Place de la Concorde and the presidential box at the Palais Garnier opera house.

While living in Paris, he visited London a few times to participate in several group exhibitions. In 1959 another scholarship took him to the British capital. He attended drawing and printmaking classes at Saint Martin’s School of Art while working as a restorer and gilder for a prestigious framing shop. In 1961 he entered the British Railways Poster Competition and won first prize.

He began to investigate matter-rich Art Informel. His work with matter materialised in the creation of a singular language that would produce the well-known Puertas [Doors] series.

In 1963 he returned to Barcelona. He continued working on the Puertas series, depicting doors of Barcelona with a recuperation of matter-based form. Those doors were the bridge between his Art Informel period and the beginning of a process of synthesis, composition and structure of the canvas—without abandoning figuration—that grew increasingly geometric.

His work began to lean towards abstract geometry, Op art and kinetic art.

Three-dimensional geometry remained the basis of his work until 1974, when he returned to the pictorial flatness of oil on canvas, performing a broad exercise in composition, colour contrasts and optical illusions. In 1970 he ventured into the fields of work by Muestra Española de Nuevas Tendencias Estéticas (MENTE group). That same year, he was chosen to design the official poster and medals for the European Swimming Championships held in Barcelona. In 1971 he designed a mural-like building facade in Barcelona.

In 1972 he travelled to the United States for the first time.

Interested in the idea of making art more accessible to society, Navarro Vives and some of his friends founded an art publishing house (Disform Ediciones).

A hiatus due to ill health altered the course of his painting, and in 1978 he returned to the figurative path. He devised a new language based on three principal themes: still lifes, boats and landscapes. Despite this radical shift, construction, composition and colour remained the subtle leitmotiv of his entire oeuvre. 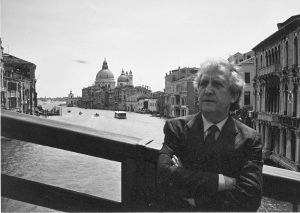 In the late 1980s he began producing urban compositions and crowded, labyrinthine rural landscapes. During those years of intense pictorial creation, he took several trips to North America and spent extended periods in Mexico.

In 1994 he was honoured by his hometown of Castelsarrasin.

In 1997 he received the “Key of Barcelona” for a lifetime devoted to art.

Family connections motivated frequent visits to Venice, and he established strong ties to the city. His inquiring mind gradually led to a compositional and chromatic simplification verging on the essential. This was the period of his “painted atmospheres”, a magical world, once again on the boundary between fantasy and reality, reason and emotion. In those later years he inserted the human figure in his universe of Atmósferas [Atmospheres].

Since 2012, his work, based on observation, has taken on a new challenge to the imagination that questions everything, even existence itself. It was then that he began the series of ensueños or “reveries”, closely related to the conscious and unconscious. 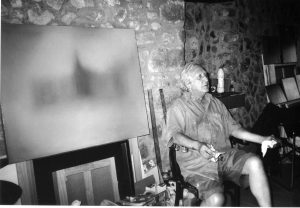 In 2016 he received the Cross of Sant Jordi, the highest distinction awarded by the Government of Catalonia.

We use cookies to ensure that we give you the best experience on our website. If you continue to use this site we will assume that you are happy with it.Ok